For tool-wielding chimps of Ebo Forest, logging plan is a ‘death sentence’ 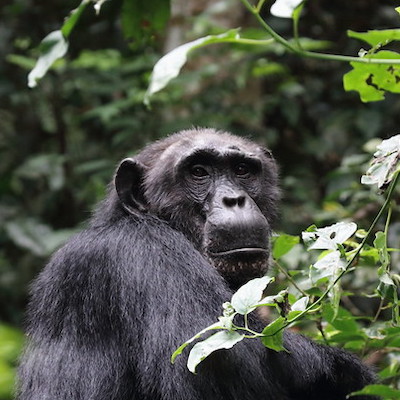 Fifteen years ago, Ekwoge Abwe was trekking through Ebo Forest in Cameroon when he heard something cracking in the distance. He scanned the forest, searching for the source of the sound.

“One of my local assistants said, ‘Those are chimpanzees cracking nuts,’” Abwe, a biologist, postdoctoral fellow at San Diego Zoo Global and manager of the Ebo Forest Research Project, told Mongabay. “I said, ‘How do you know that?’”

They traveled toward the noise. Then Abwe gazed up at the trees to see several Nigeria-Cameroon chimpanzees (Pan troglodytes ellioti), including a mother with an infant, using quartz stones to crack open nuts from an African walnut tree (Coula edulis).

“One individual actually still had a flat stone in the hand,” Abwe said. “It dropped the stone, and it almost fell on my head.”

While the local people in the Ebo Forest region were clearly familiar with this chimp behavior, this was a new discovery to science. Prior to Abwe’s encounter, scientists believed that only chimpanzees living west of the N’Zo-Sassandra River in Côte d’Ivoire used tools to crack nuts, and that chimps living east of the region didn’t have these skills. As it turned out, Nigeria-Cameroon chimpanzees in Ebo are the only population of chimpanzees in this region known to use tools in two different ways: stone hammers to crack open nuts, and flexible sticks to fish out termites from mounds.

But these chimpanzees, which are endangered and have a population of about 700 individuals in Ebo Forest (out of a global population of less than 6,000 in four major habitats in Nigeria and Cameroon), are facing an imminent threat due to a state-run logging plan, conservationists say. On July 22, the Cameroon government released a decree confirming that a logging concession in Ebo Forest had been approved, encompassing 68,385 hectares (169,000 acres) of intact rainforest, an area about half the size of London. Sylvie Djacbou, a forest campaigner at Greenpeace Africa, said the logging plans, which will transect chimpanzee territory, will be a “death sentence” to the local primates […]