In the Horn of Africa, conflict and illegal trade create a ‘cheetah hell’ 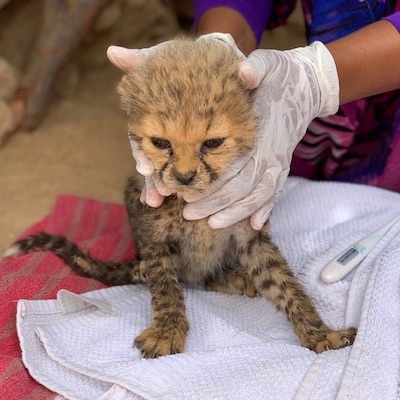 The 8-week-old cheetah cubs should have been with their mother. Instead, they were penned up in a small village near Erigavo, Somaliland, after a group of nomadic livestock farmers chased the mother away and captured the cubs from a nearby cave.

“There were actually three [cubs],” Asma Bileh, a Somaliland veterinarian for the Cheetah Conservation Fund (CCF), told Mongabay. “One died immediately … so they brought back two of them into their houses. They were keeping them for a while.”

When Somaliland’s Ministry of Environment and Rural Development (MoERD) received a tip about the cubs, a rescue team, which included Bileh, traveled to the village on Aug. 22. The baby cheetahs were a little malnourished and dehydrated, having only been fed small portions of goat milk and meat, which hadn’t provided enough sustenance.

These cheetahs (Acinonyx jubatus) are among dozens of cubs that have been rescued by the MoERD-CCF team in Somaliland this year; as of this week, CCF reported a total of 29 rescued cubs since January, three of which have died. The reason for this onslaught of rescued cubs is human-wildlife conflicts between livestock farmers and wild cheetahs, as well as the illegal demand for wild cheetahs as pets in the Middle East, according to conservationists.

While the global cheetah population is estimated to be around 7,100, the local population in the Horn of Africa is thought to comprise about 300 to 500 adults, says Laurie Marker, a leading expert on cheetahs and executive director of CCF. It’s also thought that up to 300 cheetahs are captured in human-wildlife conflicts and illegally trafficked each year from this region, which puts the local population at extreme risk.

“If there’s up to 300 animals going out, and there’s only 300 adults in the population, it’s only going to be a matter of a few years before there aren’t any other animals out there breeding,” Marker told Mongabay […]