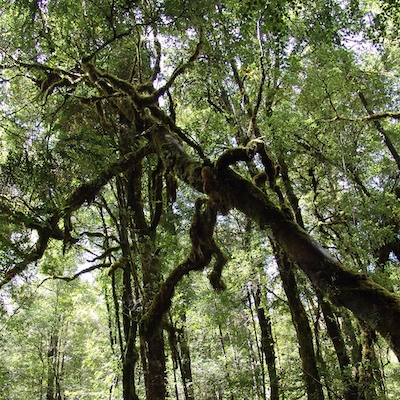 After barreling over a gravel road for about an hour, we park up in the lee of some leatherwood trees. My pulse quickens as I leap out to gather my gear; we have officially entered the Tarkine. From here, we’ll walk 40 minutes to Tiger Ridge, the basecamp for Tasmania’s multi-day rainforest walk.

At the time of writing there is one open- cut iron-ore mine and around 30 exploration licences active in this mineral-rich region, which is also the world’s second largest tract of temperate rainforest after that of western Canada. My imagination first wandered here while listening to Bob Brown describe the Tarkine’s cathedral-like trees, pure air and endangered wildlife. Unfortunately, my imagination didn’t stretch to what to pack, and as a first-timer in Tassie I have it completely wrong. Unlike my locally born companions, I’m carrying a clean cotton shirt as instead of a quick-dry one, a windbreaker instead of a rain jacket, and neither thermals nor beanie. Then there is my extra, unnecessary daypack.

Once I step inside the rainforest, however, I forget about my bags and what I did or didn’t bring. I stare through layers of old- growth trees as the wind ripples the canopy carrying the calls of black currawongs. I now understand how the Tarkine tempted our guide Trevor away from a profitable landscaping business in Hobart.

We cross John Lynch Creek via a myrtle log and hike up a steep, moss-covered hill. I quickly learn that it’s best to step on the leaf litter rather than the slippery wood and rock. I’m careful to avoid the funnel-shaped mounds that mark where tiny freshwater crayfish have burrowed to the water table to munch on rotting wood.

The rainforest thickens as we walk, and the trees grow so tall that I have to crane my neck to see their tops. The blue canvas tents and longhouse of Tiger Ridge materialise out of the green, along with a composting toilet and cast-iron fireplace […]