In ocean biodiversity hotspots, microplastics come with the currents 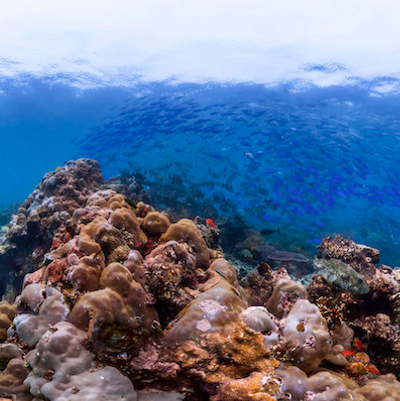 A microplastic is a tiny speck of a thing. At its largest, it’s about the size of a linseed, but smaller microplastics can’t be seen with the naked eye. Minuscule as they are, huge quantities of these particles are gushing into the ocean, and they’re almost certainly causing damage to delicate marine ecosystems, experts say.

A new report published in Science reveals the roving trajectory of microplastics after they enter the ocean. While some microplastics, like flecks of polystyrene, may float on the surface, most microplastics accrue algae and minerals that cause them to sink to the seafloor. From there, microplastics are picked up by deep-sea currents, which deposit them in areas of high sediment, creating what the study’s authors call “microplastic hotspots.”

A team of international researchers collected data for this study by taking sediment samples from the seafloor in the Tyrrhenian Sea in the Mediterranean. They found that microplastic accumulated at depths of 600 to 900 meters (about 2,000 to 3,000 feet), and that microplastic hotspots can hold up to 1.9 million pieces per square meter, which is the highest level ever to be recorded on the seafloor, according to Ian Kane, the study’s lead author.

“We were shocked by the sheer number of [microplastics],” Kane told Mongabay. “1.9 million is enormous. Previous studies have documented much smaller numbers, and … just talked about plastic fragments, but it’s fibers that are really the more insidious of the microplastics. These are the things that are more readily consumed and absorbed into organisms’ flesh.”

A “microplastic” is generally defined as a particle smaller than 5 millimeters, or about a fifth of an inch. Some microplastics are deliberately manufactured, like microbeads found in cosmetics, while others form when sunlight breaks down “macroplastics,” such as plastic water bottles and food containers. However, the majority of microplastics are textile fibers from things like polyester clothing, Kane said […]